Today I took the obscura to admire the view from the catacombs across Exeter. Unlike yesterday where we used the a modern camera to record the projections – today we used our hands,  tracing the light onto canvas with oil pastels.

People just passing by, dog walkers, birders and families all contributed – each tracing the light, filling detail, reworking unfinished parts. Some people had painted regularly, some hadn’t done anything like that in years, some were happy watching the light. People were first drawn to the details – the white windows and church spires, the branches in the foreground waving gently in the wind. It was a unique way of working, but one that artists have known for centuries. It came with quirks and challenges. It was soon difficult to see where had been done – leading to overlapping interpretations and visual echos of what was there before. Because the lens is sharper in the centre, details nearer the edges become blurred and stretched, leading to some wavy, light details in the trees branches. The birds and cars moving in the scene kept reminding us all that the image was live – a couple of grey lines in the sky trace the movement of the birds. One local was telling us all about the peregrines in the spires, and how pairs have been nesting their for years, and their battles with the buzzards! Another appreciated that while trying to find us he discovered a wonderful, green space in the city he had known for many years. Others told tales of similar other obscuras they have been in before, or certain cameras they used to own. The obscura sparked many old and new thoughts, and lots of conservations and ideas about how else we could play with the light. The video below is best viewed full screen..

Pictures below were taken with the camera obscura of the light hitting the canvas, and participants recording it with pastels. Some images have been flipped around the right way up – and in some I used the flash of the camera to overpower the projected light and reveal only the marks on the canvas. 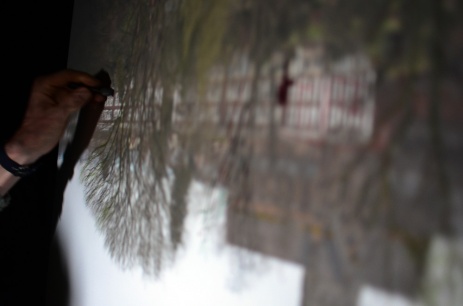 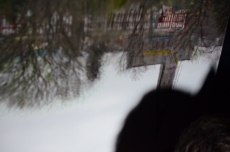 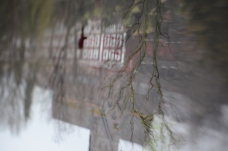 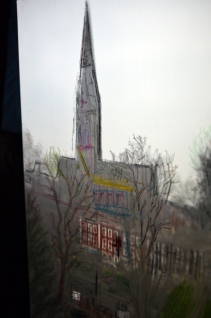 Below are some images from the finished drawing. Well done to all involved, and Thank you. Feel free to leave a comment at the bottom of the page and say hello! One chap added in a tower from his home country of Portugal, a happy accident! (That is what is in the sky of the drawing –  Upside down!) Can you see the lines of flight captured from the birds? The slight radial blur as the lens softens near the edge? The echoes of lines from where the canvas has shifted? 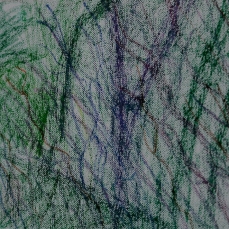 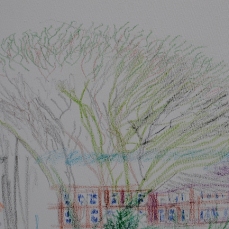 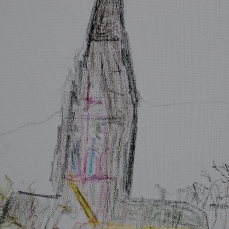 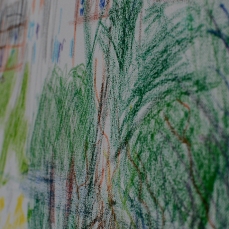 Below is a high res copy of the drawing – click it! 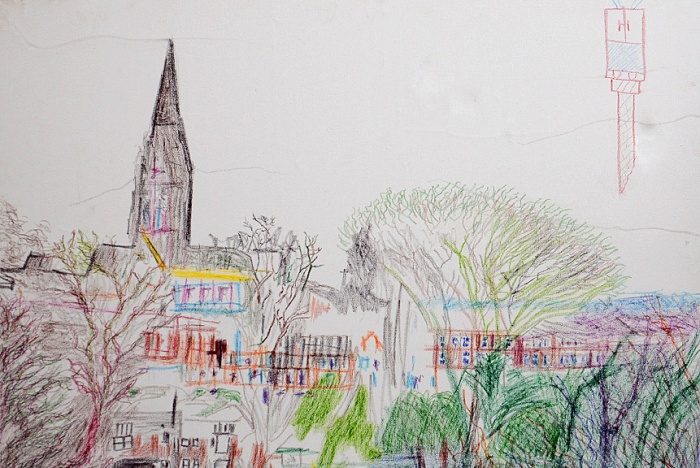 I am hoping to find somewhere to put the canvas on display for others to see – let me know if you have any suggestions or can put the drawing up for a few days to allow people to see it in the flesh.

Big thank you to Fried, Phoebe, Tom, Ruth, Mum, and the lady who stayed to help us pack it down at the end! Also big thank you of course to everyone who came and saw and picked up a pastel.

If anyone would like to learn more about Camera Obscuras – come and see my talk ‘Traps to Catch Sunbeams’ on April 26th, over at Hope Hall, Exeter. Be great to see you there!

This and yesterday at Exeter Quay was part of NOSE2013 – 3 days of unexpected art across Exeter, a fringe event alongside Exeter Open Studios.

One thought on “Day 2 – Drawing with light”