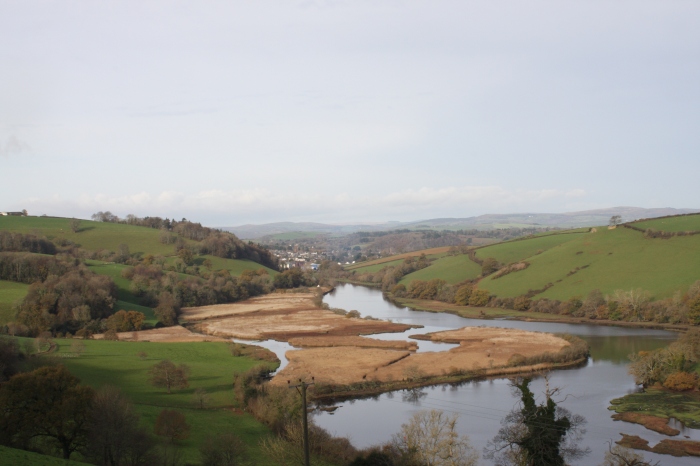 I’ve recently been working with South Devon AONB with their Fixed Point Photography project. It uses photography to help with many things concerning land use by rephotographing the same landscapes. I heard about the project whilst I was developing the Pinhole Pedallers, and was interested as it uses photography in ways that were new to me. The sites were selected by looking at a number of different merits from the practical to the aesthetic. The project has been going for a couple of years already, and I am now helping them make the most of their equipment and work on some new approaches and ideas.

The ensure the images can be shot accurately over and over again, a system has been developed that uses a small metal plate, set in a small amount of concrete that is installed at the chosen site and carefully aligned. This attaches to a removable pole topped with a design not unlike a tripod head. This is designed to allow for horizontal and vertical movement in easily recordable steps that can be simply replicated next time around. The images are shot once a season, and I can see them being useful in so many ways such as documenting land use changes, engaging the community and informing developments. As it is a long term project I am excited to see it develop, and as it grows and spans a larger amount of time it can only grow more useful and more relevant.

Below are a couple of examples of the project.

This project was great to work on. Most of my landscape work centres largely on aesthetics and small details but this now developed my technical abilities as capturing detail and well exposed images became more important than aesthetics. Whilst shooting I had to watch the exposures revealed detail in the land, and were consistant enough to be stitched together – moving clouds as well as sheep and cows caused some interesting stitches in the stitching program including an elongated sheep I nearly didn’t spot! Logistics were just as important in the success of the 3 day shoot as it had to concern the rising sun and the shadows it may cast, liaising with landowners and simply getting to the places on time (navigating tidal roads and elsewhere a wedged HGV!).